The Veteran That I Knew Best

May 24 Posted by Alessa Bertoluzzi in The Italian-American Stories 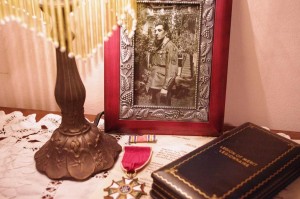 My father – Vincenzo Luigi Manzelli.  He served in Europe from June 1941 until September 1945 and being born in 1914, he was one of the older “boys”.  He had fun stories about throwing cases of wine in the River Seine to prevent his men from getting drunk.  And he had stories in his head that he could never tell of the sights in a concentration camp.  He became a Master Sergeant and received the Legion of Merit Award, a medal our family still proudly displays.

The respect and honor our veterans deserve never really sank in until the day that we drove through Arlington where we interred his ashes.  Row after row after row.  Section after section. Here rests the remains of so many who either died for our country or who served knowing that they could very well die.  That thought still dumbfounds me.  Dying.  Dying for your fellow citizens and their rights and their often unappreciated happiness.

My father’s death was especially poignant because he died September 12th, 2001 of a heart attack.  Yes, the day after “September 11th”.  Over the years my dad had often commented about the dislike of America by many countries and how one day we would see the result of that.  I called to speak to him immediately when the second plane hit the World Trade Center and it became clear that this was terrorism. I had expected to get an earful about how predictable this was.  However, I spoke and he did not.  Or he spoke very little.  A first generation Italian-American he had great pride in this country and all it had afforded him and his hardworking family.  Entrepreneurial and at times discriminated against he knew that nowhere else could he have achieved what he had.  The United States of America.  A country he proudly served was now dealt an evil, heartbreaking blow.  And he was a heartbroken man. So was he a victim of this attack also?  At 87 years of age it is hard to really say.

I would like to say that collectively, Tammie (my co-blogger at Carolina HeartStrings), our families and I wish to thank everyone who has served our great country.  The ideal family life that we strive to provide, the good times we share with our families and you and the bounties and freedom  we enjoy daily are thanks to so many who gave so very much.