My First Class at La Scuola di Eataly in NYC 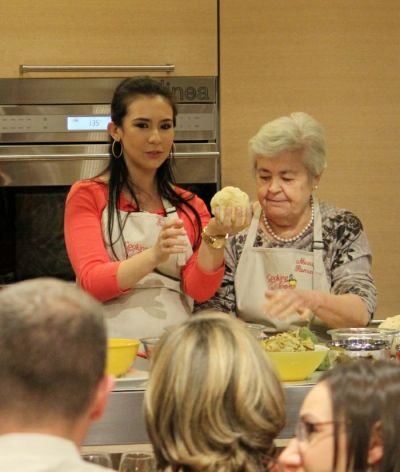 When I first heard that Nonna and  I were going to be teaching a class  at La Scuola di Eataly in New York City,  I couldn't believe it! When I attended La  Scuola's opening about a year ago to watch the Dean of students, the incomparable  Lidia Bastianich, demonstrate a spring menu, I never imagined  that I would have the honor of being  able to share that classroom with Nonna  and our students!

I was floored to learn that the class was sold out and full of some familiar faces! 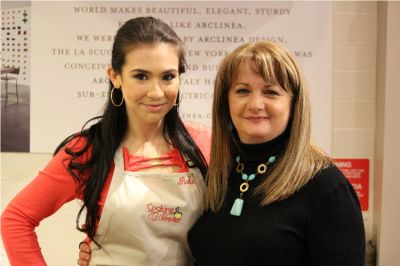 Rossella and Cecilia Cataldo - One of the biggest supporters of Cooking With Nonna! 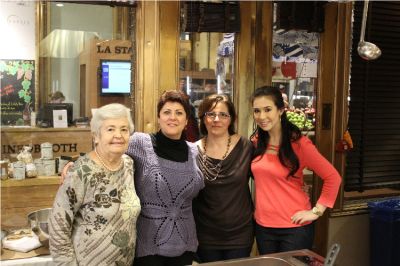 Chiara, a paesana from Mola di Bari came to learn some old tricks from the legend, my Nonna!

Immediately I enlisted the help of Cooking  With Nonna's consulting chef, Pasquale Martinelli,  who assisted Nonna and I while I  got carried away telling stories that  accompanied the recipes.  Pasquale is  currently a successful private Chef in  New York and has his own company , Warm Palate www.warmpalate.com.  Like Nonna and I, he is also from Mola di Bari  and understands the traditional  significance of all the Pugliese recipes  we demo together. 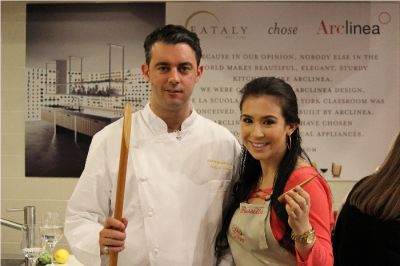 I decided to put together a spring  menu  since the class was taking  place the day before Palm Sunday.   Eastertime brings so many wonderful traditional  dishes that Nonna and I love to make  together. 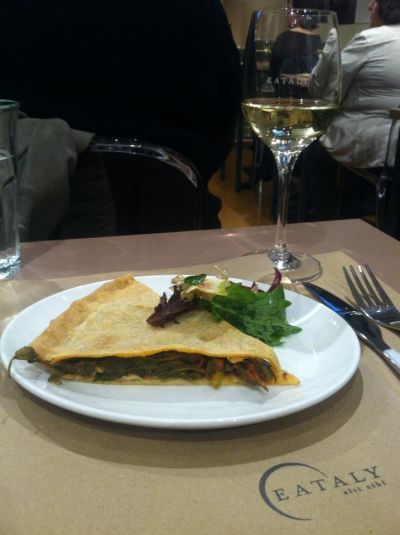 Scalcione has been an Easter time staple in my family for as long  as I can remember.  Usually, we  fast all day on Good Friday and then  eat a hearty slice of Scalcione before  going to Mass.  Nonna wanted to show  everyone how to make it the "Nonna"  way and roll out the crust by hand  with her favorite rolling pin,  which  was really a leg of a chair that  predates the unification of Italy, but  unfortunately I accidentally broke it going through the door  as we were on our way into La  Scuola! I still feel guilty!  We  managed to salvage what was left of  it, but it will never be the same  again. Nonna says she forgives me :).

Emily, Eataly's Sommelier, introduced the first wine to the class.  A lovely Fiano IGT 2011 by Tormaresca  from Puglia that complimented beautifully the appetizer.

Next it was time for pasta!!  Nonna and I wanted to make a pasta that was refreshing and traditional.  We chose the Cavatelli with Cozze and Carciofi because it perfectly represents Puglia in all its components.  Besides the official pasta of Puglia, Orecchiette, Cavatelli is a close second.  I like to describe it as an almost-orecchiette.  When making the pasta fresh, Cavatelli are dragged across the wooden board with either a knife, or in my case my thumb and left that way where as an Orecchette would be flipped over your finger to create a little ear shape.  Nonna is such a pro at making fresh  pasta, and she should be since she's  been doing it for 68 years!! 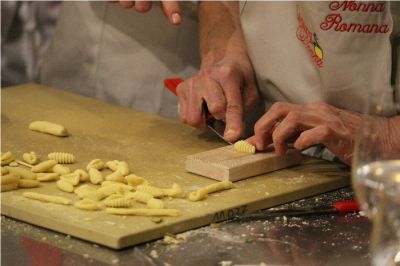 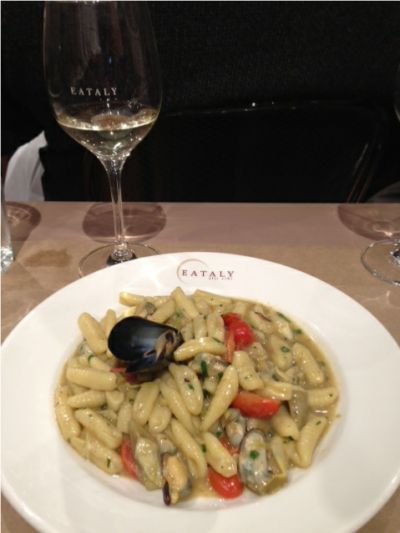 Our entree, Spezzatino di Agnello,  was a hearty lamb stew perfect for  Easter.  Spezzatino is considered a peasant  dish because it is made from the  less expensive cuts of meat that would usually  be left over. 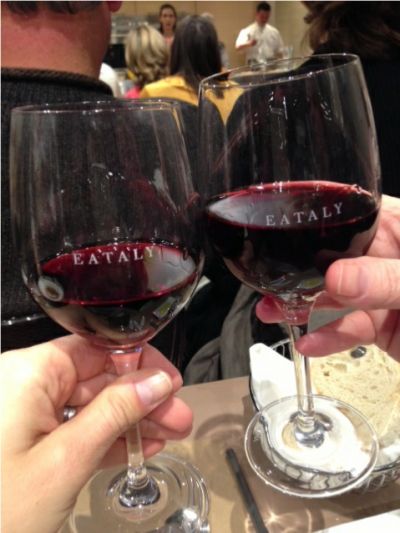 Photo: Tricia Cushing - Castello Monaci, Liante Salice Salentino DOC 2010
As everyone ate with delight,  Nonna and I prepped for our dessert (always my favorite part of  every meal)!  Bocche di Dama (Ladies' Mouths) are  an almond paste cookie filled with wild  Amarena Cherries and drizzled with a sugar  icing.  As I was doing my research, I  noticed that there were no other recipes  for these cookies online.  I knew  I absolutely had to share this special  recipe at La Scuola as it's an incredibly  simple and beautiful cookie with a wonderful  significance.  Bocche di Dama are traditionally  made in my village for wedding days.   It is said that every woman, whether  she be a peasant or a noble, is a lady on her wedding  day, and since these are the cookies  that pass through the mouth of a  lady, they are called Bocche di Dama.  Everyone really appreciated the quick and  easy recipe! 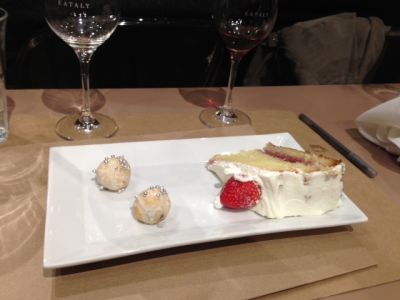 What was really a special treat was the Birthday Cake we decided to include in our menu as it was several people's birthday that evening!  (It was also Nonna's 80th Birthday a few days later) If this cake looks familiar it's because it's the same cake we made on 24HR Restaurant Battle.  The cake itself is a rum soaked (and Nonna likes her rum in her cake!) sponge cake with pasta reale (royal almond paste) amarena cherries, and lemon custard, topped with whipped cream and fresh strawberries.  Every birthday I've ever been a part of in my family has always included this cake and I was so happy to be able to share it with everyone at La Scuola. 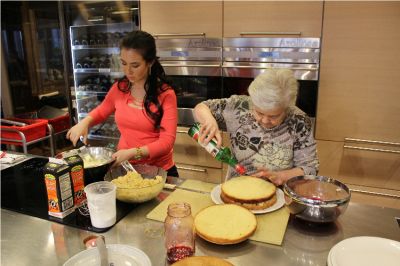 The Making of Nonna's Wedding Cake 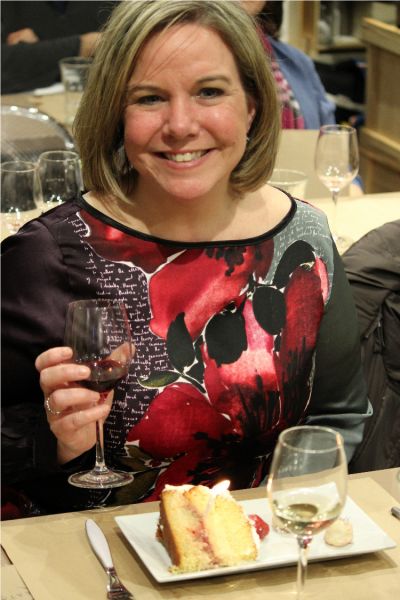 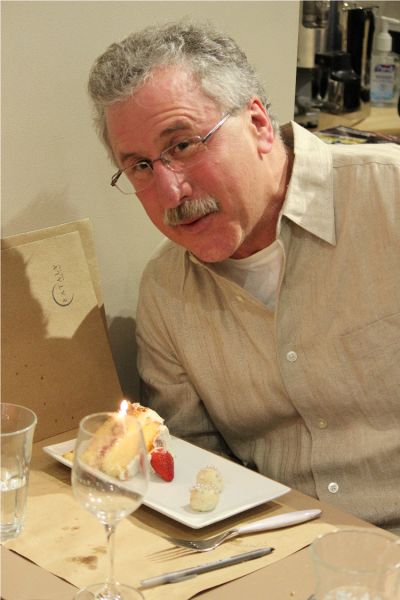 I was so proud of everyone  on my team, especially Nonna!  She never ceases  to amaze me with her drive and determination  even as she approaches her 80th birthday.  She is still such an incredible inspiration  to me as a woman and a food  personality, proving to me that it is  never too late to do anything in  life because women have no expiration  date.  She is truly my favorite teacher  and I will be her student as long  as I am lucky enough to have her. 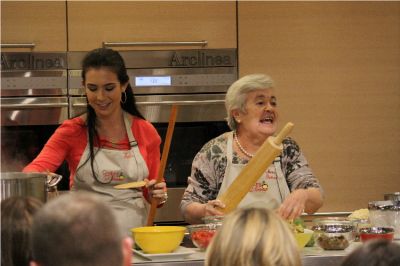