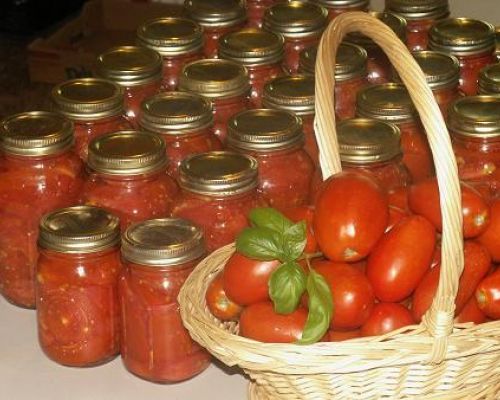 Remove the head  and any slight black spots from the tomato.

Cut the tomatoes in four parts and put them in mason jars (1 Qt. or 1 Pt. as you prefer)

With a wooden spoon squeeze the tomatoes in the jar as much as possible until the entire jar is full and without air pockets.

Optionally you can also add a leaf or two of fresh basil.

Close the mason jars with the lids that came with the jars. One bushel will give produce 23-24 quarts of tomatoes.

Once you have finished processing the entire bushel and you have closed all the jars, place the jars in a large pot and fill the pot with water to cover all the jars.

Bring the water to a boil and once it starts boiling let it boil for 45 minutes.

Shut the flame, remove all the jars from the hot water and  let them  cool off. Store all the jars in a cool and dry place. They will stay fresh for the entire year and certainly until you make a new batch the following year.

The tomatoes can be used as they are out of the jar when you need to make a sauce that calls for chunks of tomatoes.

If you need a puree, take a jar of tomatoes, put in a blender or food processor for 1- mins. and it will liquefy immediately. Then you can use it to make any sauces that calls for tomato puree... you just have to cook it a bit longer to remove some of the excess water.