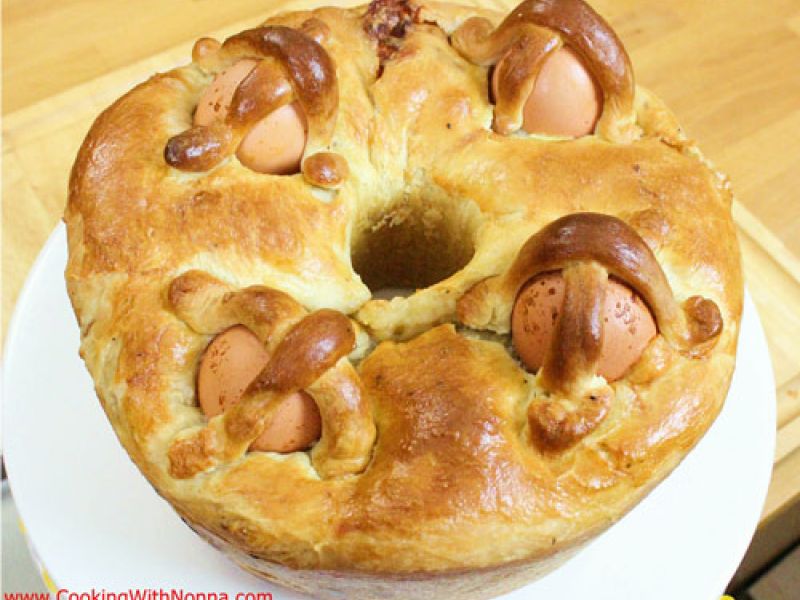 Grease a 10-inch loose bottomed tube pan with a little lard and set aside.

Dissolve the yeast in 1/2 cup of the warm water and sugar. Surface will get foamy (meaning yeast is active).

On a work surface, form a well with the flour. Alternatively you can make the dough in a stand mixer fitted with the dough hook attachment.

Add the yeast mixture, lard, salt and pepper and work it gradually into the flour. Add the remaining warm water and mix until a soft ball of dough forms. If the dough looks dry, add a tablespoon of water at a time until it comes together. Knead until dough looks smooth and elastic.

Pinch off a small ball of dough (size of a tennis ball) and save for later.

Roll out the remaining dough into a large 18 by 14-inch rectangle. Dot the dough with some lard all over. Sprinkle the surface with the grated cheeses. Add the mortadella and salami next and the provolone last. Sprinkle with a little fresh pepper.

Starting at the longest side closest to you, roll the dough (jellyroll style), making sure to tuck in the ends. Place it in the tube pan, tucking the two ends together to form a circle. Place little dots of lard all over the top of the bread.

Cover with plastic wrap and allow to rise in a warm environment for about 2 to 3 hours until the bread has risen and doubled in size.

Place the 4 raw eggs randomly on the top of the dough, pressing gently until they are half way in.  Divide the saved piece of dough into 8 equal pieces. Roll each piece into 4-inch-long ropes.  Use two pieces to make a cross over each egg.

Bake for 45 minutes to an hour or until an inserted toothpick comes out clean. When the Casatiello has about 15 minutes to go beat the remaining egg and brush the surface of the dough. This will give it a shiny golden brown color.

If top is getting too dark, loosely cover with aluminum foil to prevent over browning while continuing to cook the middle.

When bread is done, remove from oven and allow to cool on a rack. Run a knife along the inside edges of the pan, loosen the bottom and remove it from the bread.

Cut into slices and serve warm.