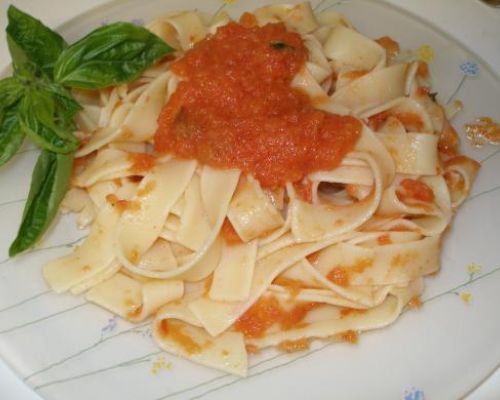 Wash and cut tomatoes in half the long way and remove the seeds.

Put them into a Large pot with water. Cook them until  the skins start to come off and the tomatoes are soft and cooked.

Drain the water from the cooked tomatoes and keep the tomatoes.

Take a couple of tomatoes at a time and remove the skin and smash the tomatoes with a fork. Throw away the skins. Put the smashed tomatoes in the bowl with the EVOO and basil. Continue until all the tomatoes are finished **. Add salt and pepper to your taste and mix. Set aside.

Put another pot up with water and add the salt to your taste.

Once the water in the pot starts to boil...you can add the pasta. Cook to your taste.

Drain the pasta and put it back into the pot.

Add 3/4 of the cooked tomatoes (with the basil and EVOO in it) to the pasta and mix.

Put pasta in the plates. Before serving add a spoonful of sauce and basil on top.

Have some grated cheese on the table for the people that want it.