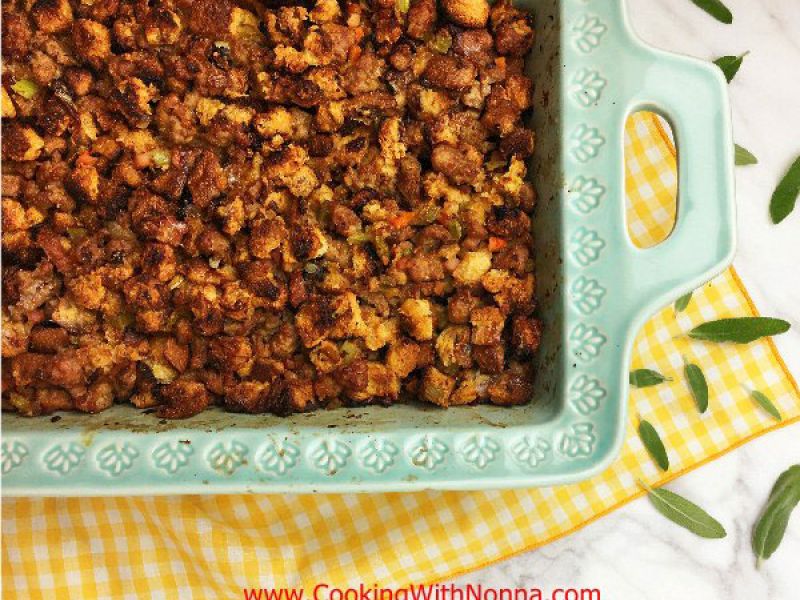 Preheat your oven to 400 degrees. Butter a large oven proof casserole dish and a sheet of aluminum foil large enough to cover it. Set aside.

Spread the cubes of Panettone onto two 13x18 inch baking sheets. Bake until the panettone has just begun to color, about 10 minutes. Remove from the oven and transfer to a large mixing bowl.

Put a large sauté pan over a medium flame and heat 2 tablespoons of the oil. Add the shallots, celery and carrots to the pan and cook until soft, about 7-10 minutes. Add the remaining oil and turn the heat up slightly. Add the sausage and Pancetta and sage to the pan and cook until the sausage has browned, about 10-12 minutes. Remove from heat and add the mixture to the mixing bowl with the panettone.

In a separate mixing bowl whisk together the stock, eggs and melted butter. Pour over the panettone mixture little by little and mix well until all the liquid has been absorbed. It may appear dry at first, just keep mixing. Turn out into your buttered dish and cover with the foil, butter side down.

Bake covered for 20 minutes. Uncover and bake an additional 10 minutes, or until the top has colored slightly.

* To make ahead the night before , prepare up up until step 4 and refrigerate. Leave out for 2 hours before baking and bake as directed.